With the same thoughtful, dignified, and hopeful tone with which it began 15 years ago, the Episcopal Forum of South Carolina announced today that its work is done.  In a letter to EFSC members, President Warren Mersereau reported the organization was closing its doors, and transferring the remaining $2200 balance in its bank account to the Episcopal Church of South Carolina.

The tone of the letter is typically modest and very much understates the important role the group played in holding the Mark Lawrence regime to account in its early years, and restoring the Episcopal Church to its full potential following the Lawrencians' disastrous attempt to leave the Church in 2012.

The letter is reprinted below.

The Forum never much strayed from its original mission to celebrate and encourage spirit of the Episcopal Church and the Anglican tradition in South Carolina.  It patiently and repeatedly attempted to engage Lawrence and his supporters in meaningful dialogue and a search for common ground.

The Forum also sponsored conferences and workshops for loyal Episcopalians that brought prominent Church leaders into the Episcopal Diocese of South Carolina and provided lively engagement on topics of common interest and exploration of the Church's proclamation of the Gospel.   Most importantly, the Forum leadership provided a network of support and encouragement to loyal Church members who felt abandoned by their clergy and parish leaders who cast their lot with the Lawrence conspiracy.

All of this came at a price.

Forum members were socially ostracized by their parish families, often with the encouragement of their clergy.  They were vilified publicly by the Lawrence high command in ways that exposed the truly dark heart of its schism and the extent to which it would go to demonize those who got in the way of its political goals.

In spite of it all, the Forum stayed true to its mission and continued to provide substantial, high-road engagement among dispirited Episcopalians.

Many made this organization a success.  However, in addition to Warren, we feel compelled to mention the particularly devoted service of Lynn and Dottie Pagliaro, Melinda Lucka, Dave and Barbara Mann, and all those who served on its programming and governing boards.

Congratulations to you all from the many loyal Episcopalians whose lives have been changed by your commitment and courage!

To All Members and Supporters of The Episcopal Forum of South Carolina:

Following the schism in 2012, with the guidance of Bishop Charles vonRosenberg, the Forum shifted its emphasis to helping energize The Episcopal Church in South Carolina, the on-going diocese of The Episcopal Church, by offering adult education conferences on a variety of subjects, including hosting as featured guest speakers then Presiding Bishop Katherine Jefferts Schori and current Presiding Bishop Michael Curry.

As Bishop Skip Adams’ gracious and celebratory accompanying letter explains, funds remaining in the Forum account have been transferred to The Episcopal Church in South Carolina and everyone associated with the Forum is encouraged to remain active advocates for The Episcopal Church in both their local parishes and through diocesan activities. In other words, let’s continue to be “Enthusiastically Episcopalian!”

With deep gratitude for the support provided by the Forum over the past fifteen years, offered both personally and for the Board of The Episcopal Forum of South Carolina. 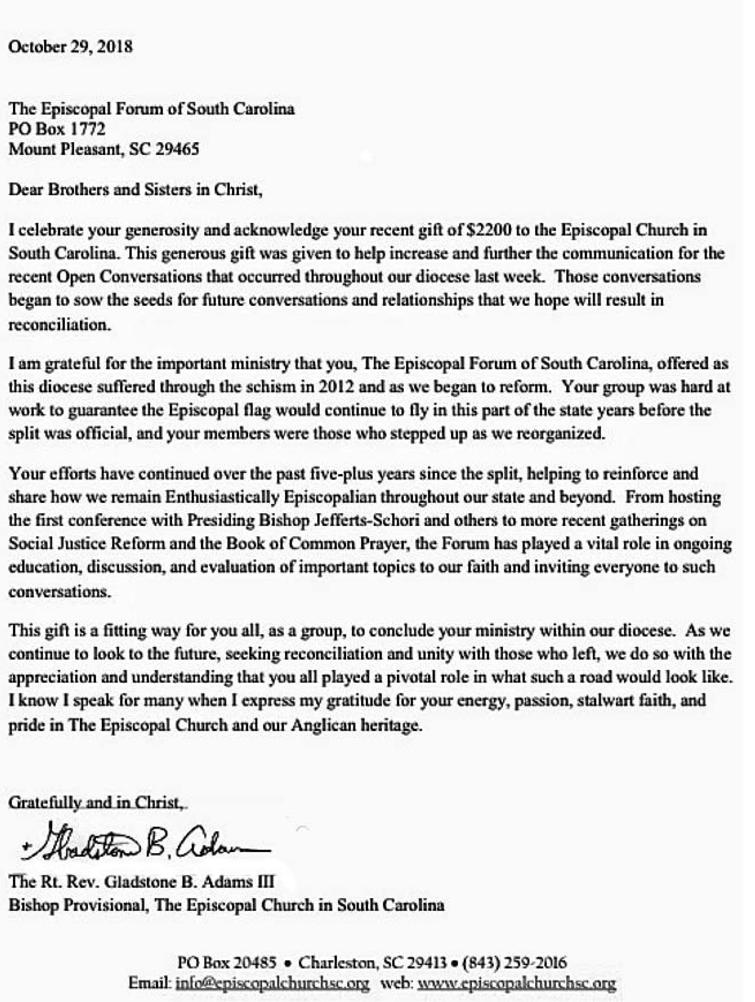