Out of control spending suggests Lawrence knows the party's over; Spokesman hasn't yet told us who is paying for the last hurrah with GAFCON

Even with a breath-taking $280,000 deficit last year, the Lawrence regime is showing no sign of curtailing profligate spending as the former bishop and a party of eleven friends and allies head off to Jerusalem this week to join others perpetually at war with the Anglican Communion.

Their destination is the Global Anglican Futures Conference, which is organized by current and former Anglicans who are opposed to what they see as western cultural influences in Anglicanism.  In recent years they have rallied around the belief that admission into the Kingdom of God is limited to heterosexuals.

GAFCON is not recognized by any of the four Instruments of Anglican Unity that govern the Communion.  Neither Lawrence nor any of those joining him seem to have any official role at the conference or reason to be there, except the ubiquitous Canon Kendall Harmon who is scheduled to lead a breakout session on hell.  Click here to go to Hell workshop with Canon Harmon

Lawrence is widely admired among the ultra-conservative GAFCON leadership for the damage he has done to the Episcopal Church in South Carolina.  Among those in the Lawrence party is Beaufort Attorney Alan Runyan, who was the chief architect of Lawernce's costly and disastrous legal strategy, recently rejected by the South Carolina and U.S. Supreme Courts.

Lawrence apparently enjoys traveling and has routinely overspent his travel budget as a bishop.   In 2017 his 'diocese' reported that he spent over $44,000 on travel, which undoubtedly contributed to his organization's staggering deficit in 2017.

Financial and budget records that spell out the reckless spending of the Lawrence administration mysteriously disappeared from the organization's website shortly after SC Episcopalians reported on what was going on.

A spokesperson in his Charleston headquarters has not yet responded to our request for information on who is footing the bill for the group in Jerusalem.

Both Federal and state courts have said Lawrence is not legitimate leader of the Church's Diocese of South Carolina such that he and  parishes leaders aligned with him could very well be held liable for any misspending.    They are facing what could be a devastating trail in Federal court this September.

We'll let you know if we get a postcard. 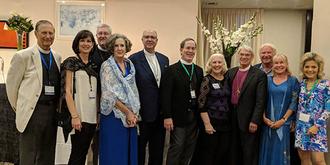